By the summer of 1915, the German raiding fleet suffered a heavy blow with the demise of the entire light cruiser force as well as the loss or internment of the five passenger liners. With the exception of the existing submarine force, albeit limited in size, the Germans no longer had an anti-commerce presence in either the Atlantic or Pacific.

It was all too apparent that the original surface ships were just ill suited to sustain an effective long-term strategy. The support infrastructure required to maintain
refueling options was just untenable. It had been suggested that a “wolf in sheep’s clothing,” so to speak, was the answer. Everyday steamers could be quickly converted into a viable raiding force. All any ship needed was a reasonable speed and a solid armament. They already had the range to stay at sea for the required period of time.

Möwe epitomized this new strategy. As the most successful raider of the war, she accounted for 44 ships, far exceeding any other raider in both numbers and tonnage sunk. This was all accomplished over two separate ocean voyages, and even more astonishingly, Möwe survived the war to serve under various flags until she was finally sunk by a British submarine in April 1945.

Möwe started her life in 1914 as the German banana boat Pungo. She was serving
as a tender in the Baltic, when tapped for conversion to a raider. She was the first to be armed with the heavier 15cm guns, greatly increasing firepower. She was also fitted out with four torpedo tubes and a substantial cargo of mines.

She sailed on her maiden voyage in December 1915 with the plan to first lay mines off Cape Wrath and La Rochelle. Over a ten day period they claimed three ships including the British pre-dreadnought battleship HMS King Edward VII. Möwe then made for the shipping lanes when she claimed her first merchantman, the British flagged steamer Farringford.

Over the next four months, Möwe traveled as far as the South Atlantic and managed to sink or capture 15 ships all the while staying clear of the Royal Navy. On one occasion, she even managed to escape a close brush with HMS Highflyer, who a year earlier sunk the Kaiser Wilhelm der Grosse. She made her way back to Germany in early March 1916 to much glory, admiration and many decorations for her captain, Korvettenkapitän Graf Dohna-Schlodien, and her entire crew.

For a brief time, she was renamed Vineta and dispatched to the Baltic Sea where she claimed a single prize, Eskimo. Again as Möwe, she was fitted out for her second raid into the Atlantic. She sailed in late November 1916, followed shortly thereafter by Wolf and Seeadler the following December.

Over the next three months, Möwe succeeded in adding 25 more ships to her already impressive list. She weathered two gun duels with the merchantmen Otaki
and Governor and her prizes included two notable ships. Yarrowdale returned
to Germany, where she was converted to the raider Leopard, and Saint Theodore who was converted to the raider Geier at sea 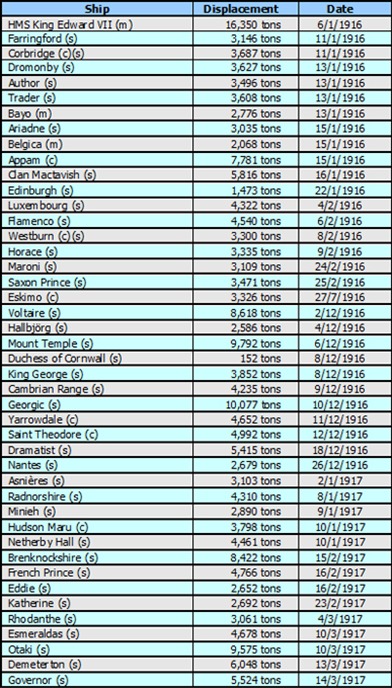