Keith drew first blood on turn 3 when one of his leopard 2’s killed a Soviet T-64 on a road (13I4), blocking its use and slowing the Soviet forces following it. Simultaneously a BMP-1P took a track hit, preventing it from moving on, and a catastrophic explosion of a Soviet ZSU-23 proves that the dismounted German Milan teams are not to be ignored. The Soviets react by dismounting infantry to sweep the woods of the ambushing Germans. After a platoon of BMPs unload their infantry for the sweep, they move north to flank a pair of leopard 2s on hill 7.11. Other Soviet forces move slowly through the light woods on the south edge of the map. They have good cover but are moving slowly.
On turn 4 the Germans kill another T-64 with a Milan and a leopard on hill 7.11 kills a BMP, but the Soviets extract revenge on the leopard, which dies in a fusillade of fire from multiple directions. Meanwhile, fierce hand-to-hand combat in the southeastern woods results in casualties for both sides.
Turn 5: A second leopard on hill 7.11 falls victim to the hoard of Soviets when it exposes its turret sides to keep up fire on so many enemy units. A German Milan team meets its end when T-64s creeping the board edge get off their shots before they can escape. German losses are beginning to mount. It looks dire for the FRG.
A terrible initiative roll of “01” by Keith on turn 6 further sealed the Germans’ fate. A BMP manages to knock the tracks off one of the two remaining leopards, and the last leopard close-assaulted by four Soviet squads, resulting in its elimination.
With no fully operational MBTs and limited remaining forces, Keith conceded victory to Jonathan’s Soviets. A well-earned crown by last year’s runner-up! 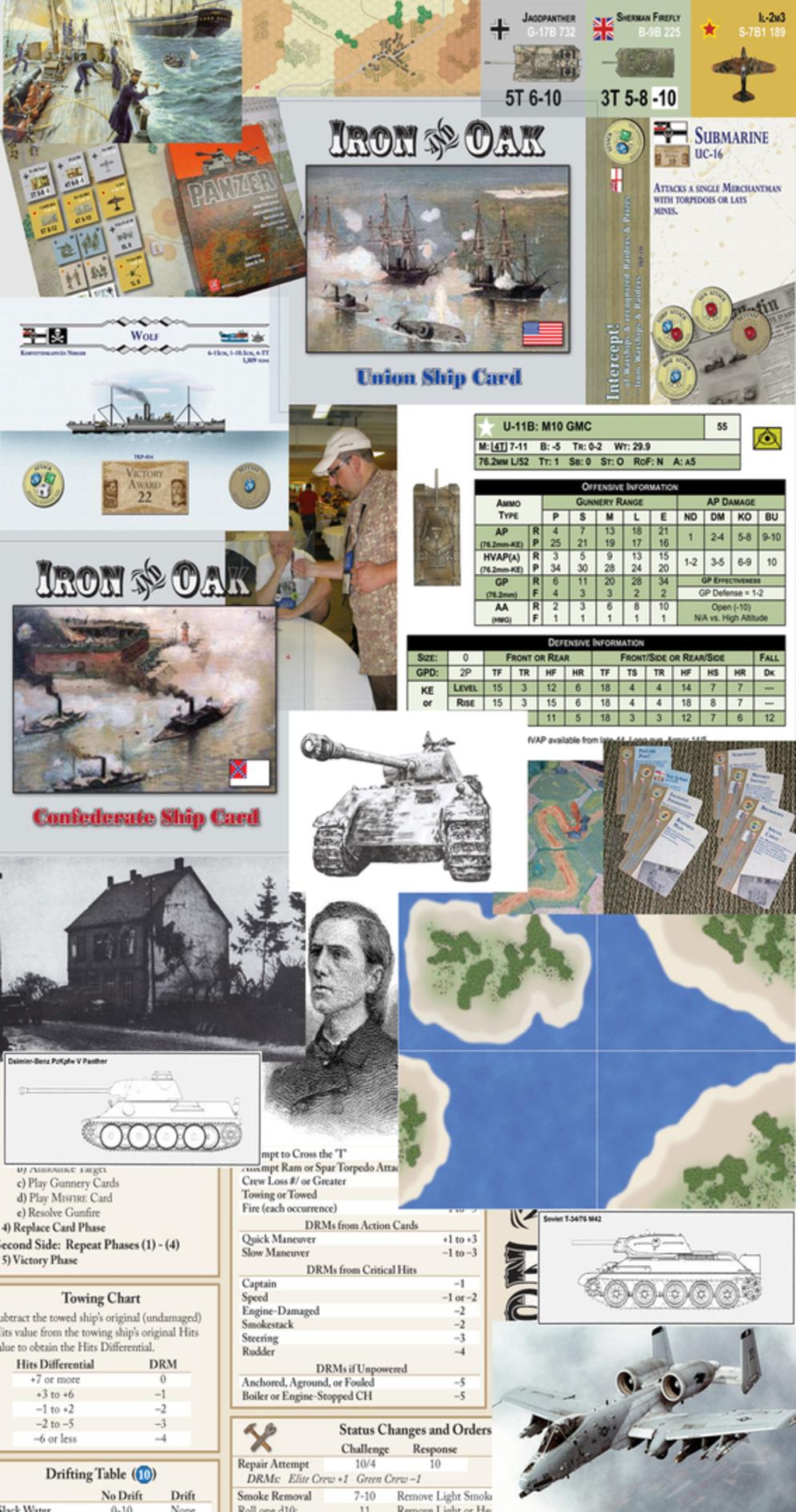 Jonathan Squibb Leads Tanks to Victory
Twelve combatants faced off in this year’s MBT tournament, including both of last year’s finalists. Five first round games yielded three marginal and two tactical victories in a variety of scenarios being chosen. All the players chose this year’s new home-grown scenario “Out of the Woodwork” in round two, where a pair of British Scimitar reconnaissance vehicles desperately try to buy time for their reinforcements to arrive. The Soviet mixed force company must bypass or overrun the scimitars before superior British tanks arrive. All four games ended in tactical victories; 3 British and 1 Soviet.
After two rounds of play the top scorers were Jonathan Squibb (10 points), Nathan Trent (8), Keith Tracton (7), Doug Smith (6) and Dave Sidelinger (6). For round 3 Jonathan would face Nathan, and the winner of their match would advance to the final. The other finalist position was wide open to others listed above, and the GM was getting concerned that he had insufficient tiebreakers in place. He sweated it out through the last die roll in the round. A close match of “Check-In Time” left Jon Squibb as the sole player with three tactical victories and a place in the final. Nathan realized too late that if he had counted his victory points earlier he would have known to play defense rather than make the risky aggressive move that cost him the game. The reigning champ Doug Smith suffered a surprise upset by newcomer Steven Praksch (who had just learned the game two days earlier), eliminating Doug from a chance at repeating as champion. The last round 3 game of consequence was Dave Sidelinger vs. Keith Tracton. Their marathon playing of the GM-designed “A Loose Noose” scenario resulted in a tactical victory for Keith’s Soviets, sending him into the final vs. last year’s runner-up, Jonathan.

The finalists agreed on “Over Hill-and-Dale”, scenario 13 from FRG for the final battle. Keith commanded the small, but high-quality German forces against a vastly larger Soviet force of moderate quality. Jonathan’s Soviets had orders to force their way across the battlefield, exiting the other side of the map. He chose to travel through the densest terrain on the south side of the map, providing cover but potentially slowing movement. 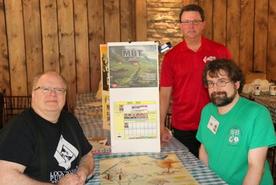 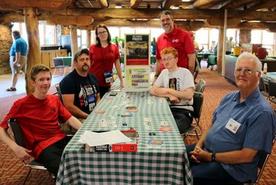 Players can sacrifice card draws in later rounds to keep choice German ships in front of them instead of being dealt three new, random ships. For the second round, only RJ chose to keep one, the warship Dresden. Everyone else had lost their more powerful ships and preferred starting with more action cards. RJ began the round playing Rendezvous Missed on Bob, putting all three of his ships out of supply (-2 drm on attack). Bob responded on his turn with a Breakout to get two more German ships on the board in front of him (more targets for everyone else!), but spent most of the round with his ships out of supply. The other players managed to put William’s German ships out of supply as well in an effort to neuter the leaders. To some degree it worked – no one scored as high as William or Bob had in the first round – but it didn’t work well enough. Even with -2 to all his attacks, William sank six merchantmen along with a couple German targets to take the round. RJ also sank six merchantmen and came second, followed by Bob, and then Stan.

Going into the final deck, William had a commanding lead in round points (8), followed by Bob, RJ, and then Stan. Bob needed to win the round and have William come last to take the plaque, and RJ could only win if he took the round, William scored no points at all, and RJ got the tiebreaker. Stan, alas, was out of the running and playing for laurels. Bob kept the Wolf, one of the strongest ships in the game, and William kept the Mowe, each sacrificing a card draw to do so. On the first play of the game, Stan played Rendezvous Missed on William’s German ships, putting all three out of supply, and then attacked two of the three merchantmen in William’s front line. One of William’s merchantmen escaped undamaged, William won the Safe Passage roll, and the ship went into his score pile; RJ could no longer win the tournament. The rest of the round featured the three lower players trying to keep William from scoring while Bob and William each frantically tried to sink German ships – Bob to win the round and keep them out of William’s hands, William to keep himself from ending up last. For much of the deck, William was stymied and Bob had a chance, but in the final turns, William’s dice heated up and he inched his way from last to first. After the final play, William had taken the tournament decisively with 12 round points while each other player had finished with 6. Bob won the tie-breaker for second, followed by Stan, and then RJ. Each of the rounds was closely contested, but, in the end, William finished with one of the most dominant victories in our thirteen years at WBC.

Kendrick Dominates Final to Take Home the Wood!
In 2019, The Kaiser’s Pirates was voted back in as a trial event, continuing our Seven Springs slalom: we’ve been a Century event, a sponsored tournament, and a regular trial event since the move! We had a small increase in players from 2018, which was heartening considering that our game is out of print and our traditional Friday-Saturday slots have become much busier over the last couple of years.
One aspect of The Kaiser’s Pirates is that, while you are never out of the game, it’s a lot easier to score points if you still have German ships in front of you – without them, you are reliant on good cards, good dice, and better play to sink or capture Allied merchantmen, the ships that not only score you points by themselves but also allow you to score the points for any higher-valued German raiders or warships you might have sunk. Inexperienced players often get frustrated when they lose their German ships, and I have seen one WBC finalist walk out before the final deck in part because he had played most of a round without any warships or raiders (needless to say, he wasn’t nominated for Sportsmanship).
This year, though, patient, long-time player Stan Buck showed folks how it’s done. Stan had lost all of his German ships in the first couple of turns in the first heat, but rather than getting frustrated, he carefully marshalled his cards and, through a mix of submarine torpedoes and mines, successful Safe Passage rolls for his merchantmen, and the sinking of other players’ warships and raiders, not only won his heat, but outscored all three of his opponents combined and played one of only three 100+ point rounds in this year’s tournament. Well done, Stan!

On the strength of his play there and in the 12-player semi-finals, Stan progressed to the final table, where he met last year’s winner, Bob Murray, 2013 champion RJ Gleaton, and 2019 WBC juggernaut William Kendrick for a three-deck game. The final often starts with card draws as players search for good combinations, but this year, everybody came out shooting, and the seas were littered early with damaged ships, tempting the finalists to spend their limited resources willy-nilly. Damaged ships don’t automatically get sunk and score points, though, as William’s starting warship, the Konigsberg, demonstrated. The ship took damage early, he hid it in an Island Refuge to repair it, and then brought it back out to prey upon unsuspecting convoys. Once back on the high seas, the ship took damage (each damage cube is -2 to attack and defense, minimum result of 1), he played Damage Control to repair it, and then took three more hits (taking him to a cumulative -6 drm) before another player managed to sink and score it. William edged out Bob, 86-76, to take the round and the lead.

If you have an upcoming event featuring one of our games, please let us know.